THE DANGERS OF KPI’S 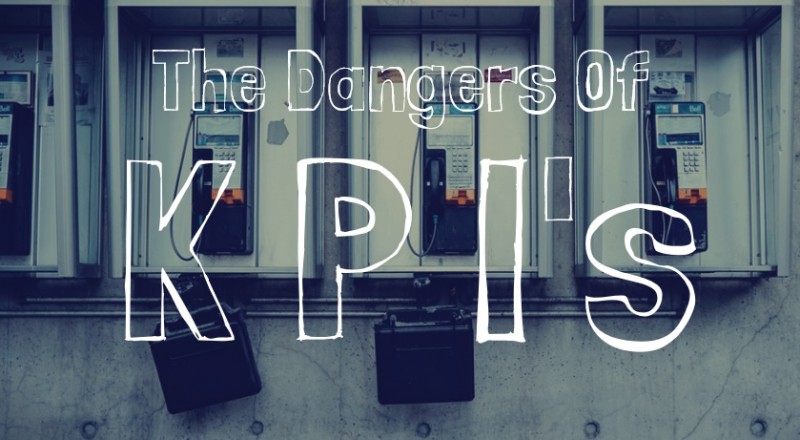 In Association with The Recruiter Index

There's No Escaping Them

KPI’s, we all have them, well I’ve never worked for a recruitment company that doesn’t have them in some form or another. Like it or not they are a part of our lives, and they can and do play an important part in any sales-based company. Even in today’s modern culture where everyone wants and tries to have that start up feel even if they’ve been in business for 20 years. With grass carpets and deck chairs in the ‘break out area’ it doesn’t matter how cool your company tries to be, there will always be KPI’s. So we have to accept that they aren’t going anywhere.

There’s lots of different KPI’s out there, I’ve had some weird and wonderful ones in my time, but the general ones are always the same, CV’s, Interviews, Call times and Dials. But the list could go on, I’m sure some of you reading this wish they were your only KPI’s. Trust me, I’ve been there, messages per day, new BD contacts per day, new head hunts per day, spec CV’s sent per day, adverts per week, client meetings, candidate meetings, referrals, leads, new jobs per week and so on. There could be a KPI for every single part of our job and I’m sure some of you have a KPI for every little thing you do.

They Could Be A Good Thing, But...

If used in the right way then KPI’s can be a good thing, but more often than not, they are unfortunately used and managed in the wrong way. What should they be used for? Well I’m glad you asked. To do it in real laymen’s terms, not to patronise, a KPI should be an indicator of your performance. It’s literally in the name, Key Performance Indicator. But it’s the emphasis on Indicator that is so often forgotten about. A KPI is NOT a target. Let me repeat that A KPI IS NOT A TARGET!

You may be thinking all I’ve done there is spell out the meaning of KPI, which to be fair I have. But the difference between the literal meaning and how they are used are world’s apart. I bet that many of you are in jobs right now where they are used as targets and that you have failed if you don’t hit them every day. And you may not know any different.

Which to me is the problem, they are being used as targets on top of your billings target. This job is stressful enough as it is, in fact it’s probably all the miss-managed KPI’s that make this job more stressful than it should be.

Money Is All That Matters

You have one target and that is to make money. And it’s the only target you should be focussed on. A KPI should only be used as a measuring tool of your daily performance if you are not hitting your billings target. If we break the word down again, take the first two words ‘Key Performance’ that should refer to an activity, and we’ll use call times as that seems to be every company’s favourite thing to focus on. So calls are our activity, the next word is Indicator. Notice that it’s not called ‘Target’(a little sarcasm goes a long way) It literally indicates your activity. But again, it should only be used as a measuring device for certain activities to ascertain why someone is behind target or where even if you are above target where you can maximise.

Which is why we should forget about KPI’s all together and focus on the small stuff. The stuff that’s actually going to help us make money. I’m a Team Manager and I couldn’t care less about call times, I don’t think I’ve ever hit a call KPI in my career. Of course you can’t make money without picking up the phone, but I’ve been at places where it’s taken to the extreme. To the point where the consultants are genuinely made to feel that calls are more important than making money, more important than getting CV’s out, so much so, and I’ve seen this happen that people make fake calls. They call up switch boards they know they can stay on hold to for a while, they list numbers that don’t work any more just to get their dials up. This stuff happens, and this is just one example of the dangers of treating KPI’s like targets.

It's All About The Interviews

In my opinion interviews are the only KPI we should have. You can make as many calls as you like, you can get as many CV’s out as you like, but with out interviews you aren’t going to make any money. Interviews are the most important and obvious thing other than a billing target to indicate how you are performing. I’ve worked with people that will do 3-4 hours a day on the phone for 5 days a week, work until 8-9pm each night and pat themselves on the back at the end of the week because they think they’ve done a great job and done what their boss determines as a great job. But unless the interviews are there, where’s your money coming from? We don’t get paid commission for the amount of calls we make.

You can smash your target without hitting a single KPI, and if you do, trust me your boss won’t care if you haven’t hit your call times for the day, or sent enough LinkedIn messages that month. And if they do then you are in the wrong place.

Focus on the stuff that’s actually going to help you, now you may be the type of person that needs to make 100 calls a day to hit your billings target and that’s fine as long as that’s what you specifically need to do. Not because that’s what your boss has told you. And if you are the boss setting that kind of expectation then don’t be surprised if there are quite a few fake calls being made.

Sweat the small stuff instead, and only you can determine what that is. But for me it’s interviews, I know if I hit my interview KPI each week I am going to bill, regardless of calls and amount of CV’s. Which then moves on to prepping candidates for those interviews that’s the other thing that goes to the top of my priority list for the day. I also manage my to do sheet pretty well, I don’t over load myself with a long list of tasks for the sake of it, a handful at most of what needs to be done that day. And that’s it.  That’s my small stuff. Work out what yours is and focus on that, take yourself out of the KPI’s for a moment and think about your own strengths and weaknesses and work out what’s actually going to help you.

If you have any thoughts, then please comment below.