You Are Going To Have A Shit Day 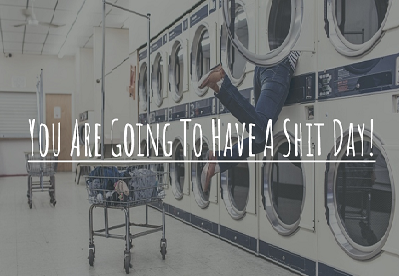 In Association with 'The Recruiter Index'

You Are Going To Have A Shit Day

Before we get into it, I’m not about to launch into a rant about how shit Recruitment is. Because it’s not. But this will be a pretty honest piece on what Recruitment can be like and the fact that you will have a shit day every now and then. And to remind you that it’s okay to have a shit day. Just don’t let them get the better of you.

Everyone Loves A Swear Word

To put it bluntly, Recruitment is fucking tough, and no one really tells you how tough it's going to be. When people first come into it, they have their own (incorrect) ideas on what it’s going to be like. I've lost count of the number of fresh-faced newbies I've interviewed over the years who are all convinced they know what they are walking into. Who then, unfortunately, walk away and give up a few months in because they can't handle it.

This job is such a roller coaster, the highs are great when you are on top and it's the best job in the world, but the lows can be hard to take. I'm big enough to admit there have been times where I've thought 'Is it worth it?', 'There must be easier ways to make money!' But funnily enough, when those five-figure pay cheques come in at the end of the month, those thoughts seem to disappear.

It's easy sometimes to think it's not worth it, and no matter how hard you try, you just can't see yourself billing that month. You can't let that mentality take over. Because as soon as you do, you've lost.

One of the reasons Recruitment has such a high turnover of people moving around is because they let the bad times win and think the solution is to go and work for someone else or give up completely.

And yeah there are moments when this job seems impossible, and even when the odds are in your favour all you have is bad luck. There's always one example that sticks in my mind that sums this up perfectly. I had someone on my team, who was great, they had all the qualities you wanted in a Consultant. They had gone away for a week with four finals to happen and two offers accepted before they left. It was looking like they were going to have an awesome month. In the first two days back in the office, two of the finals that were meant to happen that day didn't. One because the candidate had accepted an offer elsewhere, and the other just didn't show up. The other two were rejected while they were away. The two offer accepts had a change of heart. Then to top it all off, a placement they made earlier in the year decided they wanted to leave within the rebate period.

Now that is some pretty shit luck and that example may be quite extreme, but these things are going to happen now and then. It's how you handle them that will determine if you are going to let them win or not. How you react is a choice, a choice only you can make.

But it can also be the place you work at, I've worked at the places where you can't sit down until you get a CV out, or if you don't do an hour on the phone before 11 am you have to queue up at the Director's desk to explain why (True story). And you are told you can't go home until you've done two hours on the phone, even though you sent three CV's out that day. It's places like these where people feel like it's just not worth it.

And if you are in a place like that, then get out! Get out now!

But if you are in the right place working with the right people then Recruitment is a great career choice. The obvious reason being money, Recruitment is a job where you can earn as much as a stockbroker just by sending out a few CV's a week. One month can change your life completely. And that's not an exaggeration. I've worked with people who have earned £30,000 commission in one month, yes that was their commission, not their billings.

The financial rewards can obviously be amazing, but it's not always about the money. It's such a varied job, it's not your typical office job and it's not your typical sales job either. We get to work with some amazing clients, from major banks to cool software start up's. We get to make a difference to these businesses. We get asked our opinion and advice on major decisions. Our candidates rely on us to help them and guide them through one of the most stressful and biggest decisions they'll make.

What Will The Future Bring?

This job is amazing if you want it to be. And it can be whatever you make it. Especially with all the surge in social media use and the traditional model of Recruitment becoming more and more obsolete. Who knows what Recruitment will look like in a few years’ time.

This job can lead to so many different things and the opportunities are only going to increase as technology and the game changes over the next few years. But you need to open yourself up to them. And you are not going to see them if you are sulking about a deal not going in.

So What Are You Going To Do About It?

There are more and more people writing and sharing content online who will become the Speakers and Influencers of years to come. The methods of finding candidates are no longer limited to just ad responses and scrolling through job boards with social media now playing a huge part. There’s also been a rise in Recruitment related start up’s from specific branding companies like Hoxo Media and video platforms like Hinterview.

Now is a great time to be working in Recruitment as there seems to be so much freedom and acceptance of new ideas out there, so if you don’t like what you are doing or where you are doing it, then come up with a new way of doing it.  You might just create the next big change in the game. Create the opportunities for yourself.

It's Okay To Lose Now And Then

So yeah this job is tough and there will be days when you come out feeling like you’ve lost, but that’s okay, as long as you don’t let them add up. It’s okay to have a bad day, you need to accept that it’s inevitable, but don’t let the bad times win because god knows what you’ll be walking away from.